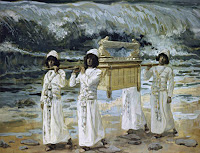 
Israel's crossing of the Jordan occurred while the river was at flood stage (cf. 4:18).[1] This area is known for its seismological activity, and some scholars have suggested that an earthquake is what caused the river to be blocked: "Adam is modern Damiya on the east side of the Jordan just south of where the Jabbok River flows, eighteen miles north of the fords at Jericho. The steep banks of the Jordan are particularly susceptible to mudslides because of the large amount of water flowing together here from the two rivers."[2]
The NIV Archaeological Study Bible notes that earthquakes have affected the Jordan’s flow many times in the past: "The most recent occurrence was the quake of 1927, at which time a 150-foot-high (46m) embankment on the western side of the river collapsed, completely blocking the waters for more than 21 hours. Similar cutoffs have been recorded (moving backward in time) in A.D. 1906, 1834, 1546, 1267 and 1160."[3]
Psalm 114:3-4 supports the view that an earthquake affected the river when the sons of Israel crossed it: The sea looked and fled; The Jordan turned back. The mountains skipped like rams, The hills, like lambs.
Does this mean that there is no miracle in Joshua 3:15-17? Absolutely not! Alfred J. Hoerth wisely wrote, "Some scholars think a . . . landslide was the mechanism God used for Joshua, but others prefer to understand the event as entirely supernatural. If God did choose to use a landslide, its timing still requires a miracle."[4]
In the Bible, God performed some miracles that were outside the realm of scientific possibility (Genesis 7:19-20; 1 Kings 17:22), but He also performed other miracles that were natural events that He timed perfectly (cf. Genesis 24:10-14). Both types of events are acts that only God can accomplish!
There are several applications that we can derive from God’s
“natural” miracles:
1) God is in complete control of every aspect of His universe
2) God never fails
3) God’s timing is perfect
4) God’s plan for our lives can be trusted
5) God’s plan is the best plan for our lives
Thank God for His “natural” miracles!
[1] Walton, Matthews, and Chavalas, The IVP Background Commentary: Old Testament, 213.
[2] Ibid.
[3] NIV Archaeological Study Bible (Grand Rapids: Zondervan, 2005), 306.
[4] Hoerth, Archaeology and the Old Testament, 206.
Posted by makers at 6:00 AM